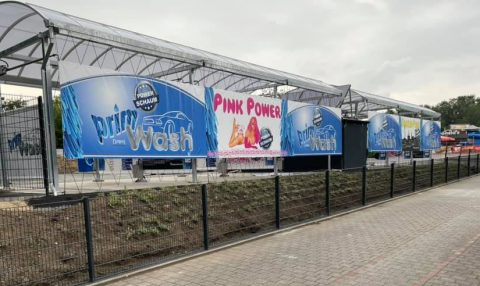 At a total of twelve self-service car washes in the Ruhr area, a cartoon figure is emblazoned to advertise pink cleaning foam in the wash boxes. The company behind the advertisement received a reprimand from the German Advertising Council, but the operator is sticking to its outdoor advertising.

A female citizen felt sexually harassed by the outdoor advertising of the PrimWash self-service car wash in Dortmund. The Advertising Council upheld her complaint and issued the company a public reprimand for advertising by disparaging and discriminating against a person. However, the operator Detlef Weber sees no reason to change his outdoor advertising.

Detlef Weber uses the comic figure Jessica Rabbit from the 1988 film ‘Wrong Game with Roger Rabbit’ to advertise his power foam in his self-service wash boxes. In his experience, his customers mostly react positively to the eye-catching advertising.

“Women in particular prefer the pink foam and stand by their cars with their mobile phones to take pictures of the pink vehicles”, Weber says in an interview with CarwashPro.de. After the public rebuke from the advertising council, the car wash in Dortmund was under a lot of media attention, but no criticism can be heard or read in the media reports and interviews either.

Coloured foam is the trademark

Detlef Weber explicitly relies on the advertising effect of the pink cleaning foam at his twelve self-service car wash stations throughout the Ruhr area. In addition to the eye-catching colour, the foam also has the smell of chewing gum on customers. His customers have been able to choose from different foam colours for 1.5 years.

In his concept, Weber has linked the foam colours to a motto and designed the corresponding wash boxes at the wash stations differently. The customer can therefore specifically choose the colour of the cleaning foam in which he wants to wrap his vehicle. In addition to the pink foam, Weber uses the yellow ‘Borussen Power’, which comes with yellow foam, in Dortmund, a city that is interested in football.

Since the complaint was an isolated case and the citizen in question was not willing to talk, Weber does not plan to redesign its outdoor advertising.