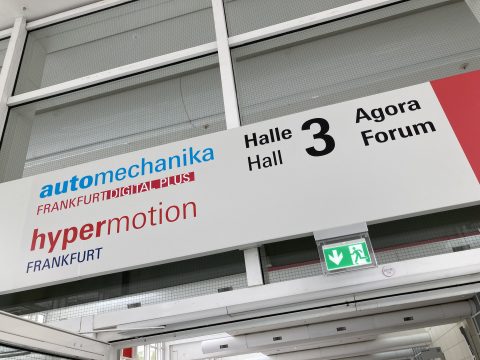 Automechanika 2021 was still at half speed

The Automechanika trade fair last week was not crowded, but there was plenty of news to discover in Frankfurt. Christ showed their portal wash Alpha, WashTec focused on ‘smart’ washing, Kärcher brought a dry ice blaster and Kenotek showed a ceramic coating.

Whereas Automechanika is usually a showcase for washing equipment and demonstrations, this year the physical fair was a subdued celebration. Exhibitors are happy that a fair can take place, visitors must show test results or vaccination certificates so they can enter safely.

Almost all exhibitors say that the visitor numbers Frankfurt were disappointing, but also that the expectations were not necessarily high. About half of the 388 exhibitors at Automechanika and Hypermotion had a physical stand in Frankfurt. Most of them brought a stripped-down version of their regular fair presentation.

Despite the stripped-down edition, most exhibitors did have a lot of news to report. Christ has rollover Alpha on display, Kenotek has a new ceramic coating and Adriateh showed their ‘Stekerr’, a charging station that visually shows with colour to what extent a car has been charged.

Kärcher brought their new dry ice blaster and a portal wash this year, while at previous editions they showed off several rollovers on a stand at least twice as big. WashTec did not bring any equipment and used the exhibition floor mainly to update visitors on ‘smart washing’ and the possibilities of subscription-based washing.

For Visomax, it is difficult to show new products. The coatings specialist has made a nice stand presentation of a coated bonnet under bright light, but has to deal with the international chip shortage in production. “Innovations are slow in coming, but we do want to showcase ourselves and existing products on this occasion,” says Marcel Meulenberg, who has recently taken on sales in the Benelux.

Automechanika was combined with Hypermotion for the occasion. Most suppliers of the carwash sector could be found in hall 3 of the fair complex. There was also plenty happening online. This hybrid form should be a one-off; the international trade fair is to take place physically in Frankfurt again from 13 to 17 September 2022.

Schumacher Electric has a place in Hall 3 and stands out with colourful chargers. The company does little in the carwash sector, but sees opportunities there. “The future of mobility is electric,” says sales and marketing director David Lagrand. “And people want to charge where the car is stationary for a long time – like when vacuuming the car, for example.” Schumacher makes the chargers primarily under private label, which in turn provides opportunities to use your own marketing on the poles.

Kenotek is showing a new ceramic coating and an active, very pink foam for use in the car wash. Unfortunately, no demonstration is given at the stand, but Kenotek shows beautiful images on a screen to compensate. Louis Vynckier represents the Belgian chemical brand on the German market. He would have liked it to be busier at the fair, but nevertheless he calls Automechanika a good platform to show innovations.

In a press release, Messe Frankfurt announces that some 10,000 visitors from 70 countries followed the trade fair programme online and in Frankfurt.