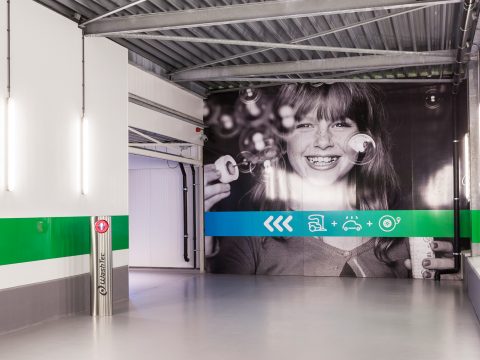 Cleanbuild developed the Cleanpanel specifically for the car wash industry. It is easy to maintain. The panels are now also available with a photo print, which transforms a regular wall into an eye-catcher.

Entrepreneurs in the car wash industry are increasingly focusing on the customer experience. The interior of the car wash plays an important role in this. Nick Elbertsen, account manager at Cleanbuild, sees this often. “Our Cleanpanel panels were initially developed for their practical, hygienic properties. Strong, no corrosion and easy to clean. But we increasingly hear that entrepreneurs also choose us because of the bright color and sleek design of the panels. Appearance is becoming increasingly important.”

With the new Cleanpanel advertising panels, Cleanbuild is responding to the demand of entrepreneurs. Elbertsen: “In addition to the white and gray panels, we want to offer the car wash entrepreneur something extra. With printed panels you have all the freedom in terms of design.” For example, the printed panels can be provided with logos and house styles, but also with life-size atmospheric photos and advertisements.

Cleanbuild already had stickered panels in its range, which are often used for gas stations canopies. Now the printed panels are added. What is the difference? Elbertsen: “With the printed panels, the image is printed directly on the panels during production and finished with a flexible lacquer layer. With stickers, the sticker is applied to the panels after production.” Cleanpanel plastic panels are resistant to extreme weather influences and common chemicals, so they can be used both indoors and outdoors.

Cleanbuild BV will present the new, printed Cleanpanel plastic panels during the Tankstation & Carwash Vakbeurs (10th & 11th November). In the stand it is possible to view a demo wall and to get more information about the product.