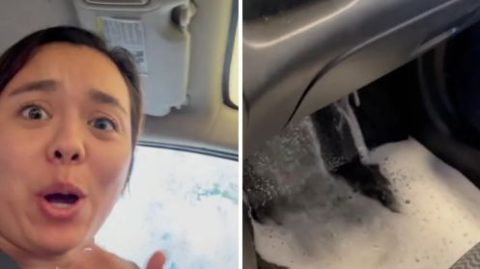 It is the nightmare of any car wash customer but luckily it seldom happens: an unwanted inside wash. Sadly, Sydney Shibuya from Honolulu was not so lucky. Since then, her car flood video on TikTok has had more than 18 million views.

“Uhhh, I don’t know what to do!” Sydney Shibuya screams, as water and soap started flooding into her 2015 Nissan Versa while she was in the middle of a cycle.

The video shows soapy water flowing in from beneath the glove compartment on the passenger’s side of her car.

After several “uhmms,” “uhhhs,” and an awkward “haha,” Shibuya then turns the camera to herself to reveal her horrified face as she watches the carpets on the floor of her car get completely soaked.

The comment section on the specific TikTok video is especially worthwhile. One user asked: “Did you try putting it in rice?” Another one replied: “I’m not a mechanic, but I’m at least 65% sure that’s not right.”
Another commenter gave a friendly reminder to “Calm down, the dryer part is coming”, while yet another user asked: “I mean, did you specify outside car wash only?”

Shibuya later posted an update video, where she went back to the car wash, stating that she never had this problem before. She was told that the drains on her hood were clogged with leaves and debris, which caused a buildup of water that eventually led to a leak into her A/C, resulting in a wet carpet and a lot of stress.
If you ever, as a customer, get in a similar situation then honk your horn, so that the operator can stop the program before any permanent damage is done.